Extraordinary General Meeting was conducted at the Croatian Community Centre, Rocklea in Brisbane at 7.00pm 19 July 2019

Last night (19 July 2019), an Extraordinary General Meeting was conducted at the Croatian Community Centre, Rocklea in Brisbane at 7.00pm.
The long-standing members requested this meeting due to irregularities of the AGM held on 2 December 2018 and the issue of applying for membership among other things. It is still not clear how a person can become a member of the Croatian Community Centre. A Request to Convene a General Meeting was forwarded to the Croatian Community Centre (Qld) Limited’s registered office on 29 April 2019. The notice was signed by more than 5% of members as required by the Corporations Act 2001.
Invitation for the EGM, dated 10 June 2019 was mailed to some members (I would like to note here I haven’t received this invitation) but some of my close friends who received it said they received the letter approximately 3 weeks later than the date of the letter. Very slow mail.

After most of the long-standing members walked out in protest, these people proceeded with voting.

Article 16 of the Croatian Community Centre Memorandum of Association states “The President shall preside as Chairman at every general meeting of the Association … or is unwilling to act, an Associate President shall be the Chairman or if an Associate President is not present or is unwilling to act then members present shall elect one of their members to be Chairman of the meeting.”. Nikola Bilic is not the President but he chaired the meeting. It seems to me he is calling all the shots and Valentina Bajic is here for the ride, ignorant of the Rules of the Association. She seems to be controlled by N. Bilic. Why did Valentina Bajic break the Rules?

Corporations Act 2001 states that 5% of members can call the meeting and the Association has 21 days to call such a meeting after the request has been sent. Invitation to such a meeting should be send soon after the 21 days after the request has been sent. Their letter was dated 10 June 2019, 42 days later. To call the meeting the members requesting the meeting may ask the company under section 173 for a copy of the register of members. Despite paragraph 173(3)(b) of the Corporations Act 2001, the company must give the members a copy of the register without charge. Well, we had to pay $250 to get the list of members which in our opinion is as old as dating back to the year 2009. Please note, I was listed as a member on this list but to repeat, I wasn’t allowed to attend the AGM! Still lots of irregularities.
Here are some of my observations of what transpired last night.
Suddenly and without being announced, Croatian national anthem was played.
The obvious seating arrangement – approximately 50 long-standing members of the Croatian Community Centre took their seats at the front facing seating arrangement. There were also approximately 30 of the “members” (well we don’t know if they are financial members or acting as proxies) who were seated together in the separately allocated seating against the windows. Those “members” all appear to be young generations of people.

Please note none of the long-standing members know who these people are nor we can confirm if they are legitimate financial members who are allowed to vote at a meeting. Everyone was let inside to the upstairs hall; no members were rejected like it was done at the AGM last year. I too was allowed to attend the meeting. Those who followed our story from December last year, I wasn’t allowed to attend the AGM even though I paid my membership in due time and didn’t receive any correspondence to say my membership was rejected. We were all handed a blue piece of paper by Nicola Bilic.

Security guards were again present. On the wall next to the stage, there was a blue piece of paper pasted saying ‘This meeting is recorded by MILK’. Bilic stated the Agenda of today’s meeting which was the removal of the current directors and appointment of the new temporary directors. He said as of todays date, there were 401 registered members, 160 registered proxy votes for the current committee and the 3 registered proxies against.
Some questions were asked by the members. Bilic proceeded to conduct the voting. At approximately 7.10pm, 50 of us long-standing members walked out in protest before the voting was conducted. Only the new people (which were seated together at the separate seating against the windows) were left and few of the committee’s family members. Long standing members didn’t participate in the voting as they don’t recognise this committee as it currently stands.
After the long-standing members walked out, voting proceeded being called by N. Bilic.
Long-standing members remain in good spirits. We haven’t given up on our Club yet. To be continued…. 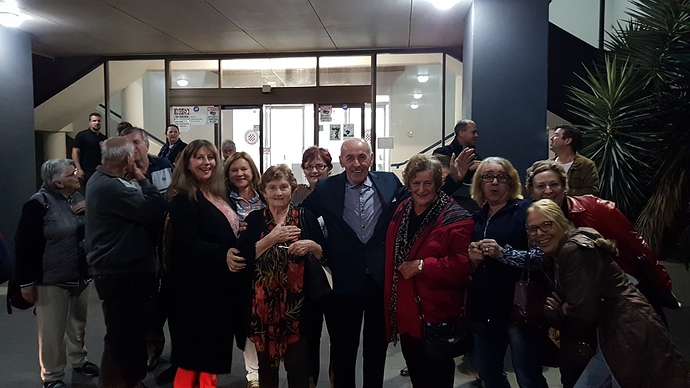 Long-standing members remain in good spirits. We haven’t given up on our Club yet.

We always suspected those people acting as proxies were fake and now we have the proof: