A History of the Early Croats

One of the major factors that contributed to the rapid spread of the proto-Croats tribes, particularly throughout Europe, can be attributed to their seafaring skills. Croats throughout history were well known for their boat building and seafaring skills and were a military force both on sea and land. Proto-Croat tribes of the Huravat Kingdom (Kingdom of Mitanni) were allies with the Egyptians from 1400 BC, who were considered a naval power in ancient times (prior to the alliance with the Huravats, the Egyptians invaded the Huravat Kingdom via the Euphrates River after 1510 BC). It is probable that the proto-Croats started to develop their seafaring skills during this period. The Goths from the 3rd AD century and the Avars from the 6th century AD subjugated the Red Croat tribes and utilised not only their cavalry units but also their seafaring skills for trade and for war, especially against the Byzantine Empire. Other empires throughout history also utilNavy the Croatian navy and mercenaries such as the Persians in the 7th century, the Franks against the Saracens in the 9th century, the Normans against the Byzantine and Venetian Empires in the 11th century, the Moors in the conquest of Spain in the 11th century and the Spanish against the English in the 16th century. Croats were also instrumental in Columbus’ discovery of the Americas in the late 15th and 16th centuries. In the 16th century, all Turkish admirals were Croats and many Croatian mariners (who were taken as slaves or enlisted as mercenaries) served in Turkish fleets with the second language at the Turkish Court for the military and navy being Croatian. Croatian naval power was also demonstrated by Dubrovnik’s power and independence during the Napoleonic Wars. During the First World War Croats made up the majority of crews of the Navy of the Austrian-Hungarian Empire.

By the 1st century AD, contemporary trade centres were also established around the Baltic Sea, including at Gotland and at the mouth of the Vistula River in northern Poland. In the 2nd century AD during the Marcomannic Wars on the Western Roman limes at the frontiers of Germania, trading routes were forced east of the Alps and the Amber Trade Road was established that linked the North and Baltic Seas to Central, Southern and Eastern Europe via the Vistula and Oder Rivers through the Moravian Gate (a natural pass between the Sudetes and the Carpathian Mountains). The Moravian Gate was controlled by the Gothic tribes during this period and was subsequently controlled by the proto-Croats and other Gothic and proto-Slavic tribes from the 4th century AD onwards. 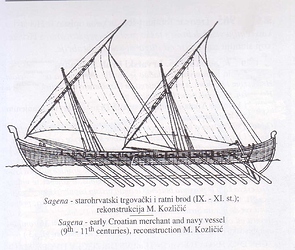 The broad rivers of the Ukraine such as the Dnieper and Dniester flow southward, draining into the Black Sea. Throughout the 3rd century AD, these rivers gave Gothic ships access to the Black Sea. Due to trade, a tribe of Heruli migrated to Scandinavia in the 5th century bringing in new knowledge and skills to the Baltic and Scandinavia. From the 6th century onwards, the Scandinavian ships were changed and equipped with sails, which ultimately led to the rise of Scandinavian power in the Viking Ages. Picture stones of ships first using sails in Scandinavia are dated to circa 600 AD. Earlier picture stones found in Gotland showed only rowing boats. According to Procopius the Scandinavian invaders of England did not use sails in the 5th century [Procopius 553, VIII, xxx]. Sidonius Apollinaris also wrote about the Saxons oarsmen in Gallia in the 5th century, confirming that Scandinavian boats prior to 600 AD were not sailing ships but long ships.

Some historical sources state that the Goths became a maritime power in the Black Sea in the 3rd century through one of their confederate tribes, the Heruli. Jordane’s “Getica” identifies the Heruli as Goths. A number of important factors conclude that the Heruli were most likely a tribe of Red Croats or a tribe that assimilated with the Red Croats rather than a Gothic tribe (although the ruling elite may have become Goths after the region was subjugated in the 3rd century). The Heruli were identified by Jordanes as living in a region near Tanais in the 3rd century. This region was inhabited by the Red Croats during this period. The Gothic forces that invaded the regions of the north of the Black Sea were land forces comprised of infantry but the Heruli were known as boat builders, sea warriors and pirates during the same period and in the same region where proto-Croats ruled for over three centuries.

The Heruli were also identified as warrior horsemen whose forces were made up of light cavalry but Gothic forces prior to their subjugation of Sarmatian tribes and the Bosporan Kingdom were primarily based on infantry. Even the Western Roman Empire in ancient times was heavily reliant on the legions which were infantry based and relied on their allies, known as ‘foederati’ to provide light and heavy cavalry which were led by native chieftains. ‘Foederati’ were the successors of the old client-peoples who had acted as buffer-states for the Roman Empire to protect the frontiers from the’ barbarian tribes’. The Romans used the Foederati as part of their political and military strategy of “Divide and Conquer/Rule (Divida et Impera)”.

The word ‘marines’ is derived from the Latin word for the sea or ocean – ‘mare’ (in Old Norse ‘marr’ and Old English ‘mere’); which was derived from the Germanic word ‘mari’ and Slavic “more”, which in turn was derived from Proto-Indo-European word ‘móri’ or ‘muori’. Croatian Admirals from the Neretian Banate of the 8th century were called ‘Mariani’ (‘Marjani’ or in Old Čakavian ‘marjakîr’, Latin – ‘dux Marianorum’. The word ‘admiral’ is derived from the Arabic term ‘amir al-bahr’ meaning ruler of the sea. The early Croats referred to the Mediterranean Sea as ‘Velemuori’ and the Adriatic Sea as ‘Sinje-muori’. The Old Čakavian word ‘marjakîr’ has been used throughout the ages as is derived from the term “marjaka” in the Avesta, the Zoroastrian sacred scriptures that were comprised in the lands of Arachosia, Herat and Bactria – the ancient Aryan lands ruled by the proto-Croats in present day Afghanistan. The Maryannu were also the warrior elite class of the Kingdom of Mitanni in Upper Mesopotamia from the 1570 BC.

Several historical sources state that the Sclaveni were specialists in the building of boats. Theophylact Simocattes wrote in circa 595 that the ruler of the Avars ordered the Sclaveni (in reference to the Red Croats) to build ships to enable his army to cross the Danube. He also stated that they had skill in fighting from fortifications made from wagons. Byzantine sources for the first half of the 6th century AD identified periodical raids by barbarians via the river networks against provinces of Moesia and Thracia. In Chapter 9 of “De administrando imperio”, Constantine VII Porphyrogenitus states that the Sclaveni (in reference to the White Croats) “…cut the single-strikers on their mountains in time of winter…” and in spring they travelled to Kiev to “…sell them to the Rus’ (Rhos)…”.

Paul the Deacon (died circa 799) stated in his “History of the Lombards” that in about 641 “…the Sclavi came with a great number of ships and set up their camp not far from the city of Siponto…” on the Gulf of Manfredonia, in southern Italy. A passage of Pseudo-Caesarius from the 6th century associates the river skills of the Sclaveni with that of other river-dwellers. There are various records that identify Croats as successful ship builders and also speak of the problems of the Venetian Republic with Croatian pirates in the Venetian records from the second half of the 7th century. At the time it was a considerable source of revenue for all countries. By the early 9th century historical sources state that Adriatic White Croatia had a strong navy. “De administrando imperio” also stated that the Kingdom of Croatia on the Adriatic during the reign of King Tomislav had a fleet of 80 sagenas (larger ships with 40 sailors), 100 konduras (smaller ships with 10 to 20 sailors, not counting oarsmen) and a strong army with 60,000 horsemen and 100,000 infantrymen. Various sources confirm that the proto-Croats (Red Croats and White Croats) and the Croats on the Adriatic not only possessed a strong land force but also possessed a strong navy and amphibious units that was experienced in waging open or guerrilla warfare on the seas and rivers.

One of the main reasons why the Avars conquered the Bosporan Kingdom in the late 6th century and set up a Khagnate, with its capital the port city of Phanagoria (located on the Kerch Straits), was the fact that the Avars were a land based force which needed to develop a naval capability. Like the Gothic and Hunnic Empires before them, the Avars looked towards the conquest of the Byzantine Empire which rose to power to the status of a great metropolis through the domination the seas. Its capital Constantinople was surrounded by the sea on three sides which prevented it from being sieged or taken by assault by the Avar mounted archers. The Bosporan Kingdom; which was ruled by a Sarmatian ruling elite (most likely by the Red Croats), not only possessed a naval force and specialist skills in boat building, but it was also a major trade centre for slaves. (Note: In ancient times the principal slave markets in Europe were the islands of Chios in the Greek period and Delos in the Roman period. After the official proclamation of Christianity in Rome in 313 AD, the centre of the slave trade shifted to the north, to the major cities in the Bosporus kingdom, which was at the crossroads of the trade routes of Asia and Europe).

This enabled the Avars to recruit, build and train new military units. Through the establishment of a military training system in the Bosporan Kingdom; the Avars professionally trained warrior slaves started to emerge, which led to the use of the term Sclaveni (Latin), Sklavinoi (Greek) and Saqaliba (Arabic) to be applied not only to the slaves and mercenaries in the Avar forces but also to tribes that were subjugated by them including that of the proto-Croats, Antes and Alans.

The term Slav is derived from the Middle English term Sclave which was borrowed from the Latin term Sclavus or Slavus and the Byzantine Greek σκλάβος or Sklábos meaning ‘slave’. In Arabic it was referred to as Saqaliba. The Sarmatian tribes; referred to the Byzantine and Greek from the 6th century AD were involved in slave trading especially in the Bosporan Kingdom and neighboring states from the 1st century AD (or earlier) when the Bosporan Kingdom was a client kingdom of the Roman Empire. Various proto-Slavic tribes that were conquered or subjugated by the Sarmatians and later by the Goths and Huns with its people sold into slavery were referred to as Sclaveni.

Over time the term Sclaveni evolved to be a reference to the numerous and distinct tribes that spoke a Slavic language, a sub language of the Indo-European language group. It is interesting to note that Servant of God Stanislaus Hosius (Polish Cardinal from 1551 to 1579, Papal legate at the Holy Roman Emperor’s Imperial Court in Vienna from 1558) stated in his work “De sacro vernaculo” of 1558 that the Croatian language was the mother of all Slavic languages (“madre lingua”). Stanislaus Hosius was born in Krakow (the ancient capital of White Croatia) in Lesser Poland in 1504. He was the Prince-Bishop of the Bishopric of Warmia from 1558.

A History of the Early Croats